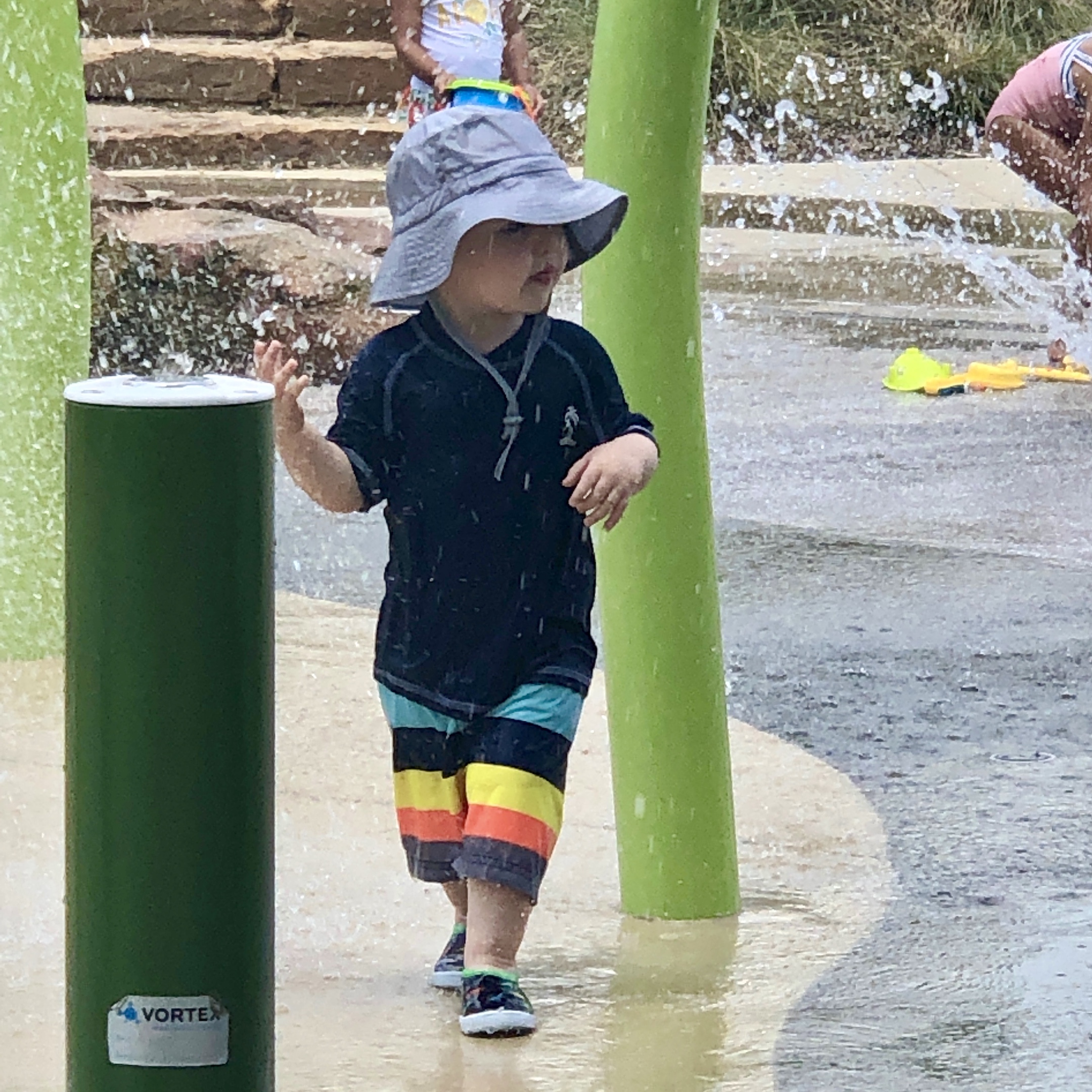 It gets really hot in Texas, in case you didn’t know. And this year, Rowan decided he loved playing in water (except for the enormous melt down when we tied swimming lessons, but that’s another story). We don’t have a pool, or even a yard conducive to water play toys. So this spring and summer before it became bone melting hot, we made it our mission to find the best splash pad in the Fort Worth area.

Now – did we visit every one? No. Did we visit a lot of them? Yes. And so below are the ones we visited, in order of visitation. And the winner? You’ll have to read to the bottom.

This one was intentional and was early in the year. We had started off the day in Cowtown at a Randy Rogers Band record signing. We ended up migrating then to Sundance Square. The fountains were on, it was a nice day, we had rain boots in the car… and so, our first splash pad foray.

This one is fun. Basically a really large rectangle of fountains. It’s in a great spot and has chairs all around for the parents. I’m pretty sure the sign says no swimsuits, which we didn’t have with us anyway. But if you go there and get in the fountains, you’re going to get sopping wet. For some reason I was a stellar parent and forgot to pack any spare clothes in the car (yes, I’m aware I have a two year old), so we had to make a trip to the H&M at Sundance Square for some dry clothes (scored a clearance sale, though, so all good).

I read a guide on dfwchild.com about free splash pads and play fountains in Dallas-Fort Worth and based my next visit off of it and driving distance. The splash pad at Bicentennial Park sounded really cool, and it did not disappoint.

Big splash pad with a lot of variety. A little river area next to it filled with sand, which he loved and stayed in perhaps even more than the splash pad. An enormous sand pit located close by. An awesome playground in the same area. Lots of shaded seating for parents. And a dragon motif throughout. Seriously, what’s not awesome about dragons?

Oh, and really, really nice bathrooms. Southlake knows their stuff, y’all. Sadly, so sadly, this was before I had the idea to write about it, so I didn’t get any pictures.

For our next visit, I thought we’d keep it really really local and go to the other splash pad listed in Fort Worth. It was closed when we went. It was supposed to be open, but nope. We drove around it but honestly couldn’t tell a lot about it.

Next up, Weatherford. They have two that were listed on the list I was consulting. But then I read on someone’s comments about a new one that had opened up. Since it was the newest, the plan was to drive to it, if it looked decent, get out and try it. If it didn’t look inspiring, we’d try the next one.

When we got there, it looked nice enough, so we went. It’s not a Southlake-sized splash pad (but not much is), but it wasn’t bad at all. It had a small playground next to it as well as a covered spot for birthdays. The downside – no bathrooms that we could find. So we changed what we could while trying to stay decent in the car and sat on towels.

Before we left Weatherford, we drove by the splash pad at Love Street Park so we could see what we potentially missed. The splash pad itself was very small. However, there were several other nice things around, like a pond, a basketball goal, and horseshoe pits.

We did not visit the third and remaining splash pad in Weatherford. I believe it is connected or in close proximity to their pool and cost to get in? I could be wrong on that, but that’s what I thought at the time and we were limiting our quest to free ones.

Similar modus operandi at Grapevine as Weatherford. Try one – if it looked promising, stay. If we wanted to gamble and go with door #2, then we’d try the other. We drove by Parr Park first. It looked okay, sort of smallish, so we drove on to stop #2.

Side Note – my husband and son went back there in July while I was at home recovering from getting all four wisdom teeth removed. Hubs said it was okay. Potentially on par or close to the Marshall Park in Weatherford, but there were other park like things around it.

Oh, Grapevine, you sneaky, sneaky Grapevine. We couldn’t really see what the splash pad at Dove Park looked like just by driving by because it was located in an area behind their pool. So since we had passed up one splash pad already, we took a chance, parked the car, crossed our fingers, and set off for it.

As we were walking to it, we walked by the pool and a pretty impressive playground. The splash pad wasn’t super close to the splash pad like at other places. Not too far, but not immediately adjacent. So we get to the splash pad, and it’s miniscule. Tiny. And it’s only separated from the pool by a sort-of fence like structure, that’s open, so you can see what you’re missing by not being at the pool. And you’re missing a lot.

We didn’t even last two minutes before we headed to the pool. And the pool? Awesome. It has excellent seating all around it and a special, covered section just for the littles. With a water slide. He loved it. We stayed all afternoon.

This one was weird. The park is out in the middle of nowhere and the splash pad was small. We didn’t visit. But, I do believe it also has a hike and bike trail, tree farm, wildflower area, and more. So perhaps the location does make sense.

So you can probably tell already what our verdict is for the best splash pad in Fort Worth. No, we didn’t go to every one in the area, but of the ones we did, by far, the winner was Bicentennial Park in Southlake. It was incredibly impressive, was very well thought out, and is convenient and fun for parents and kids alike. Well done, Southlake.