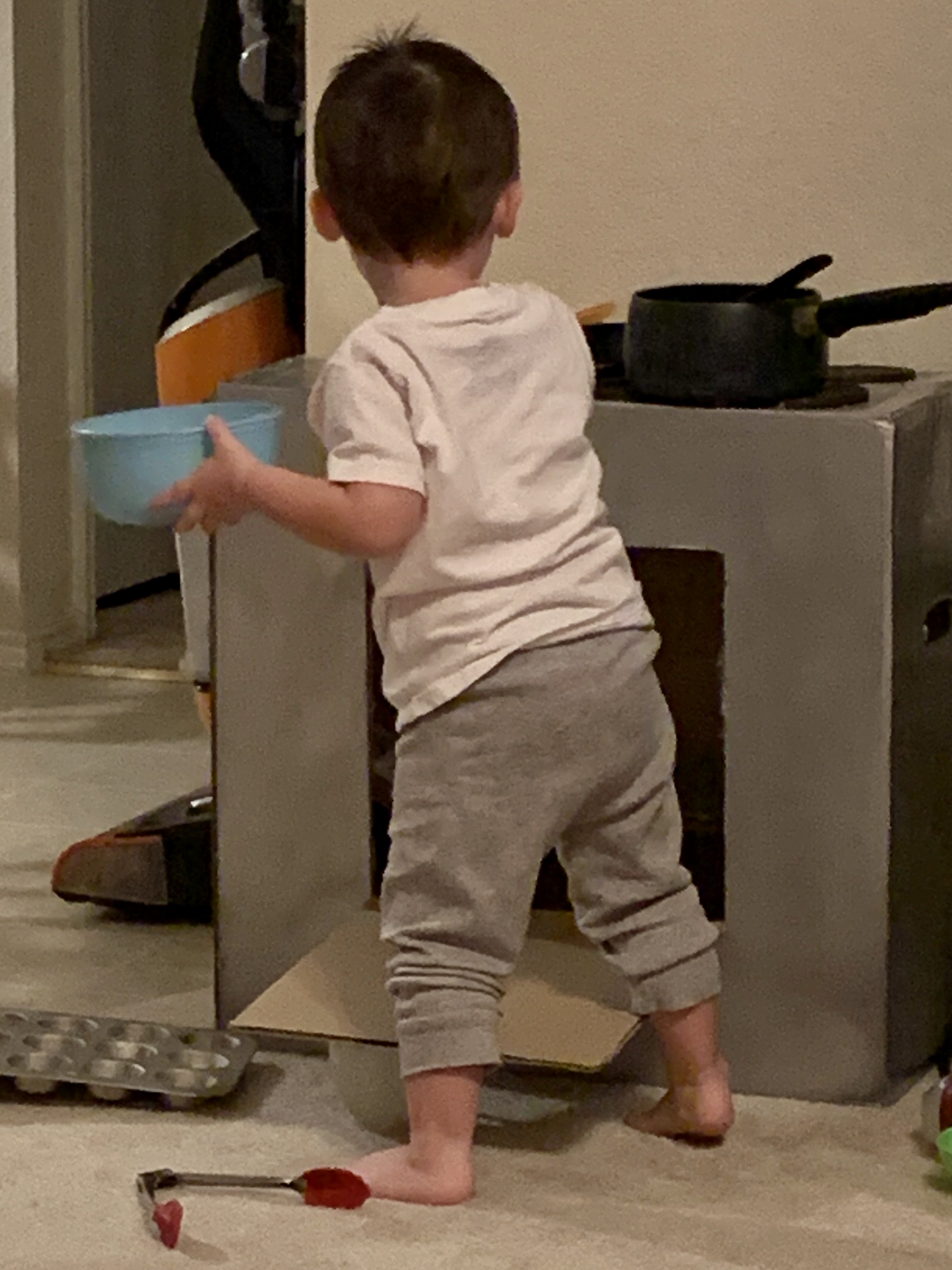 This weekend, I became a Pinterest Mom and made a pretty cool diy toddler stove for under five dollars.

My Pinterest craftiness is a rare occurrence that has only happened a couple of times previously. Well maybe a few more, but only two others are truly worthy of mentioning. Once was when I was getting ideas for my son’s first birthday party: Rowan’s Hundred Acre Wood. The second was when I Mom’d the crap out of 2019 Valentine’s Day with my handmade train Valentine box and the other gifts I made for his class and all of the daycare teachers.

But I don’t want to be the parent that buys him absolutely everything he shows an interest in. He’s a toddler. That interest can be gone in 2 minutes. And sometimes something that he loves other places, he’s just “eh” with it at home.

So a couple of weeks ago, I got a few of my old, smaller kitchen things together for him. And we played with them one night, along with some play doh food we made. And he has played with those things every day since.

But I still didn’t want to buy him a stove play set. So I got the bright idea to just make one. If he likes it, great. He can play with it until he tears it up or it wears out. If he doesn’t like it, I have virtually no expense in it. And if he LOVES it, then I can decide to eventually upgrade my makeshift activities, or actually buy him one.

I didn’t think about taking step-by-step pictures (rookie mistake), just the final ones (or at least final until I start my random small touches that I need to finish). But here are the steps to making a toddler stove on the extreme cheap.

Step 1: Find/Decide on an Idea (Hours of Your Free Time & Some of Your Sanity)

I poured over Pinterest like a fiend for about a week, adding a ton of different stove ideas to my “Toddler DIY” board. I’m just going to say this right now: some of you have waaaaay too much time on your hands. Or you’re just way more creative than me, have more tools, and obviously more skills. There were a couple I liked and thought I could do something similar to, like this one and this one. They weren’t too simple, certainly not too complicated – basically juuuuust right for my little bear.

I had a nice sized, sturdy printer box from like seven years ago that I used. It was a good height for him, and it was really sturdy. Only problem was that it closed on the top and bottom (as most do), so you can see the tape.

I bought some silver spray paint that was a primer/paint combo. I did literally zero prep work before painting – just taped up the box and went at it. Because it’s still stupid hot here in Fort Worth even though it’s the end of September and officially fall already and for the love of God can we get some below 100 degree temperatures (I digress), it dried super fast.

Now was nitty gritty time. I used my boxcutter knife that has clearly needed a new blade for years now to cut a hole for the sink (because I decided at the last minute that since the box was wider, I had room for both a stove AND a sink). I cut a hole slightly smaller than the size of the sink bowl I was going to use, so it would sit in nicely.

Now hind sight (and a husband coming in after the fact) being 20/20, I definitely should have cut the peep hole window in the oven door BEFORE cutting the oven door. But I didn’t. So we don’t have a peep hole window. What I had intended to do was cut out a small rectangle and tape a sheet protector in that space. It was also during this time that the hubs came in to help, so he did the heavy lifting on cutting out the oven door with our has-seen-better-days box cutter.

The bowl I used was one we got at the hospital for Rowan’s first bath. Which was pretty appropriate, I thought. Except it’s blue plastic, and the sink/stove combo is metallic silver. But I don’t want to paint it because I’m the weird sentimental type and don’t want to mess up his blue bath tub, dang it! I tried wrapping foil around it, but that didn’t work so great. So right now it’s functional and sentimental but doesn’t match. I may try to find a cheap silver one similarly sized sometime soon, but this works for now. Also – I didn’t glue it in, just sat in. Which he figured out within like 2 seconds, so he takes out the sink and puts it in the oven and drops things down the sink hole so they fall straight to the bottom of the box.

For the faucet part of the sink, I used the top part of a soap dispenser. Hubs drilled a hole and we just stuck the entire top part in the hole, and just left the top part showing. And in accordance with my other forgetfulness that my toddler will try and usually succeed in taking apart anything that’s not nailed or heavily glued down. So the faucet has been removed repeatedly from the sink as well.

The only thing the sink is missing (aside from it matching the stove), are the hot and cold knobs, if I choose to add them.

I had four dark brown rubber coasters that we don’t use anymore because apparently we’re heathens and don’t use coasters. On one side are grippy dots, but the other had lines and valleys, which really resembled burners. So I hot glued four of those on for the top of stove part. I didn’t paint them first, perhaps should have. But I didn’t know if I might actually want to use them again someday. Since they’re just hot glued on, I can pry those puppies off pretty easily.

One other thing I haven’t added yet are the oven knobs. I’m trying to decide what I want to do for those. I’m also trying to figure out how to use something I already have at home, in order to keep the cost below $5.00.

For the oven door handle, I had one of those cheap foam brushes that clearly I at some time thought I was going to be crafty and use to paint something but didn’t. I broke off the brush part, painted the wood dowel part silver, and glued it to the door.

During this time I also roughly cut out more cardboard and just as roughly glued it inside the oven for a shelf.

So – that’s my handmade diy toddler stove that was made completely for under five dollars. It’s rough, and it still needs a few things – like oven knobs and a better sink. Some things I didn’t do so great on – like forgetting about cutting an oven window until after we had cut the kitchen door. I didn’t add in the cost of the glue, but it was hot glue that I already had at home (my mother would be so proud).

But all in all, he loves it and has played with it every day, and that’s the most important thing.

Oh – and I was on such a crafter’s high that I also made him a miniature red oven mitt, which he now wears to do everything.

My son has not stopped playing with this stove. He has plenty more expensive toys, but he still gravitates to this cardboard stove. So, during quarantine, I did a few upgrades. The only expenses added were a couple of plastic bins and a strip of Gorilla tape. So the whole thing now amounts to about seven dollars.

I could never find anything to work for the stove knobs. I wanted to stick to my guns and not buy anything. But the harder part was that I wanted to ideally find something that would turn. Finally, I found a solution. I had some old tea lights that I had bought at the Dollar Store years ago. I hot glued the candle side to the stove. The bottom foil part of it matched the stove, was a great size, and actually turned (the metal part can be turned around the candle). I then took a sharpie and labeled the burner location, “low,” “high,” etc.

Same situation on the faucet knobs. I just couldn’t find anything at home that would work. But – I held to resolve and didn’t buy anything. I finally found some table edge bumpers that I had bought when he was an infant. They’re clear, so they match the faucet itself. The only bad is that they don’t turn. But, they make the overall aesthetic look better, and he hasn’t minded so far that they don’t turn.

I thought the stove still looked a little incomplete, so I added a backsplash, also out of cardboard. So far, I haven’t done anything with it, but it does give everything a more finished look. I was going to hang utensils from it, but now I’m not so sure. Another idea is painting a square of chalkboard paint and let him write his “menu” on it.

The cardboard oven rack that I had hastily hot glued in the first time came down pretty quickly, but I couldn’t get anything to fit right in it. He doesn’t use the oven a lot – mostly the stovetop – but I still wanted to at least give the option. So I bought two really cheap plastic containers at Home Depot. I turned one upside down to resemble an oven rack, and then there’s an extra one that can sit on top of the other when he’s done playing, that also stores his tools.

The oven door was starting to tear off on the bottom, so I applied a strip of gorilla tape that worked great. Seriously, gorilla tape is awesome.

So that’s the status as of right now. I’m really happy with it. I need to figure out something to do with the backsplash, but other than that it’s almost complete. He still plays with this more than most all of his other toys (except his trains, which are sacred). And, honestly, I haven’t felt the need to go out and buy a nice kitchen set. This makes him happy; this makes me happy. And I think a big reason for that is because he and I know that I made it for him with love.

The Best Splash Pad in the Fort Worth Area

How My Little Man Gave Me a Big Scare