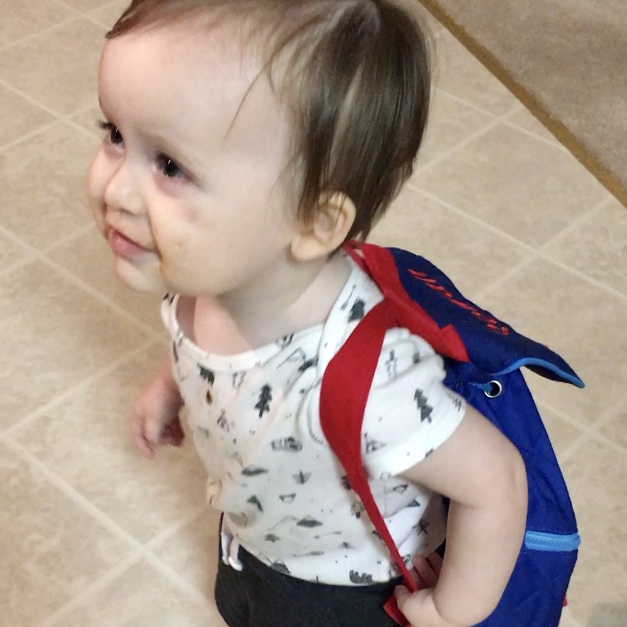 One year ago today, I made one of the most difficult decisions that I had thus far as a mother. I enrolled my child in daycare. Don’t get me wrong. I’m a working mom, so I knew this was an inevitability. But when it’s actually time to have to do it, inevitability smacks you in the face. Hard. And it almost destroyed me.

I went back to work nine weeks after my son was born. I work from home. Some people think that when you work from home, you can also keep your child. Some can. I couldn’t–and be able to perform either of my roles successfully.

Initially, I had a part time high school graduate come to our home and keep him while I was working. Which was great, because I could be on my calls or working on projects and still hear his little laugh. Or his angry cries. I didn’t check on him a lot during the day, because I didn’t want him to resort to crying for me and knowing I would come running, but it did my heart good to be able to hear him throughout the day. She went off to college in August.

Then, I found a grad student at SMU to come part time to our home and take care of him. With her, we were blessed beyond belief. My son fell instantly in love with her inherent goodness, and she will forever be a part of our family.

The Move and the Search

But then we moved from Dallas to Fort Worth. And our sitter also had to start her internship. So I was left with making the hard decision again. All child care is expensive. To hire someone to come stay at your home, even at basic rates, gets really expensive really fast. So, I started looking at daycares. Which are also crazy expensive, but not quite as much.

I had had a few rules about daycare. Like I said, I knew it would be an inevitability one day. But if at all possible, I didn’t want him to start until after he was mobile. I’m not saying all daycares are bad, but I had heard the horror stories. I was scared beyond belief at leaving my child with strangers all day. So if he was mobile, it made me feel a little better.

I visited a few. I found one that had read good reviews about, had heard good things from my neighbors about, and that I got a good vibe about when I toured it. It was a Christian daycare, operating out of a church.

Up until this point, he had only known, in all reality, three people: me, his father, and his sitter. Our families live a couple of hours away and don’t like to visit the city. Our closest friends are scattered around the metroplex, but we don’t see them often. So we were his entire world. He had gone to the church nursery, the times when he wasn’t sick, but he never did well there.

So on one side I had my fears about daycare. But on the other, I also knew the benefits. Because he was so isolated, this would give him a chance to be around other people – both adults and children his age. It would be good for him to learn to socialize. It would be good for him to acclimate to other people. But knowing all that in your head doesn’t mean your heart understands.

And So It Began

On the day of his 18 month birthday, ironically, I dropped him off at daycare. I was a basket case. I cried all day. I prayed to God to let my son forgive me for having to do this. I screamed. I raged. Let’s be real – I pretty much cried all week and still do frequently. But he survived. And I survived. And some days are good, and some days are bad. But we’re doing what we have to do. And he is growing and learning and making friends.

And they know how mommas are. How hard it is for us to leave the littles with them. That afternoon, the assistant director sent me a picture of my little man during playtime. He was smiling and laughing. And I was so incredibly grateful for her sending that.

We happen to be a family where both of us have to work. It is what it is. Thankfully we can afford daycare, if just barely. And I know – it’s tough for moms. Especially those with more than one child. Sometimes you have to stay home because you can’t afford daycare, and then you’re trying to make do on one income and dealing with all the stress that comes with it.

For those of you mothers who are fortunate enough to be able to stay home with your child by choice: CHERISH IT. I know. Being a stay at home mom is tough, too. I’m not saying it’s not. But I am guilt ridden every single day when I drop him off. I constantly wonder if he’s getting enough time with me. If I’m providing him enough of everything to compensate for being away from him. I constantly question if he will one day resent me for it.

But then I just have to rationalize that I am doing what I have to do. And that maybe I can’t provide him with everything, but I love him beyond measure, and I try to show him that every second we’re together.

Holy Crap! There Is a Line!

The Best Splash Pad in the Fort Worth Area