Toddler Tales of the Trinity Trail 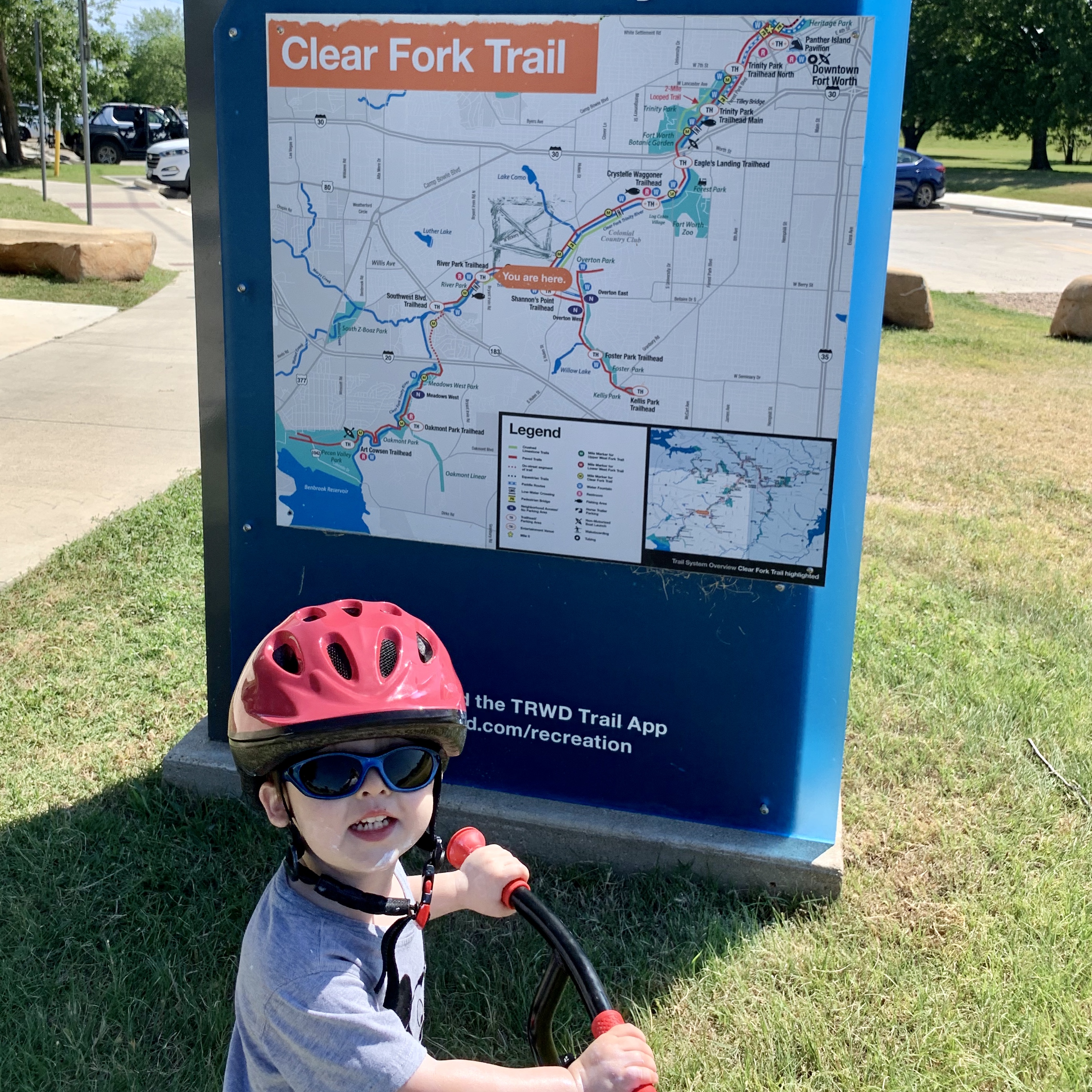 On my son’s 3rd birthday in April, we got him a Trek balance bike. Ever since, we’ve been exploring Fort Worth’s Trinity Trails for some exercise, to see some Fort Worth sites, and lastly and most importantly—to get out of the house and get some fresh air during quarantine without battling tons of people.

We’re still pretty new to Fort Worth, after moving here almost two years ago. We’re native Oklahomans. Due to job situations, we made the move to the big D about ten years ago. And then because of a different job, moved to Fort Worth. When we were in Oklahoma, we came to Fort Worth a lot. We faithfully attended the Colonial golf tournament every single year for over 12 years. Ironically, we actually stopped attending as much AFTER we moved to Dallas. And we love the museums. Fort Worth seriously has some of the best museums in the country.

Anyway, last year during the nice temps from January through May, we did some exploring around Fort Worth. We hit the Fort Worth Nature Reserve a few times, as well as the Botanical Garden. But little man was still a tiny toddler with tiny little legs and an independent streak that made him anathema to strollers. So we couldn’t do a lot of trail-like explorations, because Dad would have to carry him most of the way. In June, when it got hot but not blazing hot, we explored Fort Worth and the surrounding area’s best splash pads. From July on, just forget about being outside with a toddler.

This year, though, with his fancy schmancy new balance bike, we can explore to our heart’s (or legs’) content.

As of right now, all of our Trinity exhibitions are on bike for him and on foot for me and the hubs. I got a scooter for Mother’s Day, but that thing is not a joy, so it doesn’t go on these longer trails.

The Best Trinity Trails to Hit with a Toddler

So, long intro short, now that we’re about five trail trips in, I thought I’d start documenting our explorations, so parents with littles like us will know the best Trinity trails for a toddler (during quarantine and out), the ones to probably stay away from, and any little tips we feel you might need to know.

This past weekend we hit our fifth trail, so I’ve got some catching up to do on our documenting. But this one is where we’ll start.

Because it is already starting to get ridiculously hot, we have had to amend our trail exploring times. Last month and before, we could hit anytime on the weekend and be good. Now, we have to go early on Saturday mornings. Anything else is way too hot for the toddler (and his momma).

This past Saturday morning, we hit a new trailhead. I think it was River Park? But it didn’t say that on the sign. It just said the Clearfork trail. Anyway, we parked, sunscreened up, and hit the trail heading East.

From the get go, this one was different. First, it was way more populated—both biker and walker wise. Usually, we stay on the paved trails because of his bike. He has a balance bike, so though it goes on the gravel, he can’t coast on it like he can on pavement. And then because he’s walking it the whole way, he gets tired faster. This trail was really bike busy, though, so we had to get on the gravel trail.

We went a little over a mile and came to both a rock and a concrete bridge over the river. We could have kept going down the regular trail, but the little is obsessed with bridges, so we had to go across.

After we went across, we could have gone further east on that side also, as well as on the side we were on. We couldn’t go west and try to circle back to the car, though, because there wasn’t a cross over for us to get back to the parking lot. And it actually dead ended at a certain point.

Since it was already getting hot (we left out a little later than planned because the little man didn’t sleep well the night before), and because he had been walking his bike most of the time and was pooped, we decided to go back across the bridge. From there, we headed back west and to the car to enjoy our traditional post trail popsicles and then headed home.

This wasn’t our favorite of the Trinity trails thus far for our toddler, just because it was more crowded and we had to stay in the gravel. However, we didn’t get to explore all of it, so we’ll see how the next round goes.t

There was place just off the trail called “Mutts Canine Cantina” that was awesome. If you are a dog person, definitely check it out (with your pooch, of course).

Normally we go a little further and would have had more takeaways, but seriously, it’s hot.

4 Things I Learned about Myself after Becoming a Parent